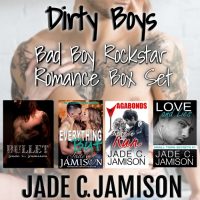 Do you love rock star romance?
Bad boy rock star gods?
The women who complete them?
Oh, and do you like your stories steamier than a sauna?

Then dig into this box set containing four full-length rock star romance novels and discover why Jade’s readers call her the “Queen of Rockstar Romance.”

Bullet
Valerie is a naïve college freshman when she meets on-the-rise rock star Ethan, an idealistic, handsome, reckless young man who’s captured her heart. She doesn’t give up on him and eventually his walls crumble down. By the time Valerie has given herself to him completely, she discovers he’s damaged and may be beyond help. Can she save Ethan and their relationship before he implodes, or will he self-destruct and take her with him?

Everything But
High school English teacher Erin is stuck with the unwelcome job of filling in for the injured cheerleading coach, but she wants to back out when she discovers she has to be auctioned as a date during the annual spring fundraiser. She’s horrified to find her rock star crush Riley Schultz, former frontman of Spawn, will be playing emcee for the event, but she’s even more shocked that he also happens to be the highest bidder for her affections, and sparks ignite when she discovers that maybe their attraction is mutual…

On the Run
They say things come in threes…like sex, drugs, and rock & roll. Love is not part of that equation—but tell that to my heart.

From the first moment I met CJ Slavin, I fell for him hard. It was as if everything else in my world muted: the album my band was about to release, the coast-to-coast tour we were preparing for, all the adoring fans who were going to eat us up. Even the drama and bullsh*t from my bandmates couldn't bring me down when CJ was around.

But he tells me I'm too young. And we're going to be thousands of miles apart. Add to it, his adoring fans will drop to their knees for him.

So what's a girl to do? At least I still have sex, drugs, and rock & roll…

Love and Lies
Casey never wanted to get divorced—and she definitely didn’t plan to go home again. But she needed a place to lick her wounds, so she headed back to her hometown, the one place on earth she swore she’d never return to. Spending time with her hypercritical mother spurs Casey to find a job quickly so she can get back on her feet—and that’s where she meets sexy Scott Wardell, a man who makes her heart beat faster even while stirring her anger.

As she gets to know Scott better, she discovers that he plays drums for a local rock band. He seems perfect for her…except maybe he hasn’t told her everything about the ex. And his creepy best friend isn’t doing him any favors, either. But even if Casey could handle those problems, she’s got her own ex and cold feet she needs to grapple with…

This box set also includes two bonus novellas: NO PLACE LIKE HOME from the Bullet series and BEATING HEARTS from the Vagabonds series.

No Place Like Home
Brad of metal band Fully Automatic has recently lost his mother to cancer and he finds himself unable to enjoy life anymore. With the help of his wife Val and his children, can he find his former zeal for living or is he destined to be numb and detached for the remainder of his days?

Beating Hearts
Brandon, an inexperienced young drummer for Kyle Summers’ band, is about to play his first festival, but first he needs to find out who’s stalking him. When he does, things just might get too hot to handle…

“This author does it right. She doesn't just throw the rockstar title around. Nope, she gives her readers what they crave. You can go in knowing you're gonna get the whole experience.” – Rosa, iScream Books, review for ON THE RUN

Are you READY? Which rock star god will you fall hardest for?

The Author / Publisher advised that this title was available for $0.99 (or local equivalent), discounted from $9.99 on 4/9/2021 at the following retailers. These links may use our affiliate tag with Amazon and other retailers and as such may earn us commissions on qualifying purchases. 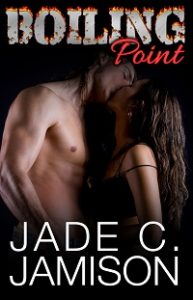 What happens to love after the happily ever after?

Emily Brinkman hears all these descriptions in her head, all the things she knows others are thinking when she joins her boyfriend, Clay “Jet” Smith, on tour with his band. It doesn’t matter that she’s going as his PA as well; she knows she’s being judged…but she also knows that the people watching are half right.

Clay can hear what all the men around him think of his sweet girlfriend and he loves having Emily join him on tour. To this woman, he’s not just a one-dimensional axe-slinging guitar god. She loves him and wants the best for him, and she won’t tell him something just because it’s what he wants to hear. But Clay didn’t stop to realize that all the guys on tour–from the roadies to security and even their frontman–would appreciate that Emily is a nice piece of a$$. He will need to learn to trust her if their relationship is going to survive.

Will Clay and Emily survive the bumps on the road or will their time on tour drive them apart?

The Author / Publisher advised that this title was available for $FREE (or local equivalent), discounted from $0.99 on 3/16/2021 at the following retailers. These links may use our affiliate tag with Amazon and other retailers and as such may earn us commissions on qualifying purchases. 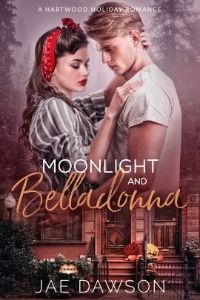 Will a high school music teacher and an indie rock star find their harmony in this small town holiday romance?

Belladonna Pagano is far too busy for love—she has until Halloween to wow the school board with Hartwood High’s Fall production of Little Shop of Horrors, or she’ll be out of a job. Besides, after her former fiancé traded their future for his burgeoning music career, she’s vowed never to give a man that kind of power over her again. Least of all a rock star.

On the outside, Cade Owens, sexy frontman for indie rock chart topper, Burning Umbrage, has it all. But he can’t outrun the ghosts from his past. When he’s forced to return to the small town holding his darkest memories to bury someone he loves, Cade makes a desperate, rock bottom choice.

A rash decision that leads him crashing headlong into a fiery woman in the woods.

And a choice that ultimately results in court-ordered community service . . . with her.

Bella and Cade risk their careers and their hearts in this musical, bewitching tale of love and redemption.

The Author / Publisher advised that this title was available for $0.99 (or local equivalent), discounted from $3.99 on 10/9/2020 at the following retailers. These links may use our affiliate tag with Amazon and other retailers and as such may earn us commissions on qualifying purchases.