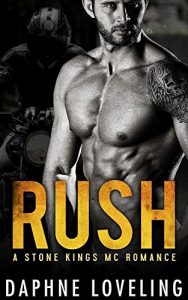 I can’t stop lusting after a killer.

Greyson Stone is the president of the Stone Kings MC, and he’s seriously bad news. He’s big and bad, dripping with menace, and covered in tattoos. He has the kind of dominant swagger that should make me want to run away…

Instead, it makes me fantasize about him.

Even though I know he’s a thug. Even though men like Greyson caused the violence that ended my father’s life…

One rough, demanding night with Greyson, and I don’t know how to walk away. Even when life depends on it…

As the president of the Stone Kings, I have a few rules. Ride or die. Death before dishonor. And the club always, always comes before any woman.

Simple. Easy. At least, it is until I see her.

Big green eyes, killer curves, and that mouth… the things I want to do to her. The second I saw her, I knew I wanted to make her mine. Ruin her for all other men.

I also knew that can’t ever happen, because I’m keeping a secret… and if anyone finds out, I’m not the only one who will get hurt.

One night with Seton in my bed, and suddenly I’m wondering… aren’t some rules meant to be broken?

RUSH is the first novel in the Stone Kings MC series. It is a completely stand-alone, steamy romance, with a HEA, and NO cliffhanger!

The Author / Publisher advised that this title was available for $FREE (or local equivalent), discounted from $0.99 on 3/7/2018 at the following retailers. These links may use our affiliate tag with Amazon and other retailers and as such may earn us commissions on qualifying purchases.