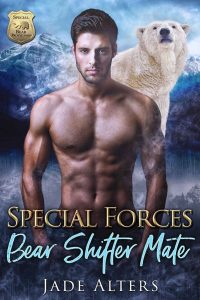 His life was simple. Nothing stood in the way of his duty to his country. Jace was alone, but he accepted it; there was no place for him among humans.

His mission: find the Russians and stop them from harming our country. He found them alright but no one warned him Julie would be involved.

Jace had always looked from far but now that he’s felt her searing touch, she’s all that he wants.

Their worlds were separate. That’s the way it’s always been.

To build a life together, they have to break all the rules. If they get out alive, will Julie accept his bear as her mate?

The Author / Publisher advised that this title was available for $FREE (or local equivalent), discounted from $3.99 on 2/13/2022 at the following retailers. These links may use our affiliate tag with Amazon and other retailers and as such may earn us commissions on qualifying purchases.