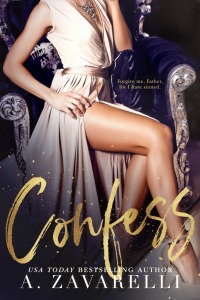 One contract. Two signatures. A marriage of inconvenience.

Lucian West isn’t husband material. He's a stiff in a suit. Granted a hot one, but still. He’s one of the most hated men in America. An arrogant asshole. A ruthless attorney.

He gets what he wants in the courtroom, and outside of it.

Now, he wants me.

For reasons I can’t fathom, he’s determined to make me his wife.

He makes it clear he’s not above blackmailing me to put a ring on my finger.

The man might be richer than sin with devilish good looks, but hell will freeze over before I ever give my heart to him.

I don't do love. I don't even do relationships.

But all of that changes when I stumble upon the tragic, beautiful woman confessing her sins in the dark of night.

She’ s supposed to be nothing to me. Nothing but a wife. Her smart mouth drives me crazy. Her attitude brings out the beast in me. I want to protect her. I want to bring her to heel. I want to own her pretty lips.

She belongs to me, she just doesn’t know it yet.

I've already made her mine in name. Now it’s time to claim the rest of her.

Explosive chemistry. Plenty of angst. Packed with emotion and dark themes. Confess is a standalone within the series and has a complete ending.

The Author / Publisher advised that this title was available for $0.99 (or local equivalent), discounted from $3.99 on 7/15/2019 at the following retailers. These links may use our affiliate tag with Amazon and other retailers and as such may earn us commissions on qualifying purchases.