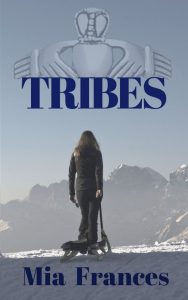 A dark, gritty post-apocalyptic tale of love, loathing, & survival!
Alex, her sisters, and their kids are on their way to her camp in the Adirondack Mountains for the Columbus Day weekend when the unthinkable happens. A voice on the radio warns the country is under attack! Greeted by guns and bullets when they try to seek shelter, they're forced to hide in a cave to wait out the fallout. After two weeks in their dank hole, they're wasting away from starvation. Things are made worse when Alex discovers her sisters gone. They've taken the rented minibus and returned to the city to search for their husbands, leaving Alex to care for her seven nieces and nephews. It's an arduous 35-mile hike through the mountains to her camp…a journey through hell! Society is devolving. The strong: looters, murderers, and rapists preying on the weak. The small hamlets and villages they pass through have become killing fields, as survivors battle each other for the few remaining supplies. Above them, the skies are growing darker every day, blocking out the sun. Temperatures are plummeting. Winter is coming early. Her burden increases when Alex rescues two orphaned children she finds injured and starving on the trail. Now she has nine hungry mouths to feed! Their little band is elated when they finally make it to camp, but in order to keep from starving, they'll need to learn to live off the land the way the Indians that once inhabited the mountains did. In her struggle to keep the children alive and fed, Alex stumbles on a hidden cache of food only to discover it's guarded by a man who'll haunt her nightmares. Half guardian angel, half demon. Both barbarian and benefactor. A strange mixture of brutality and gentleness, cruelty and caring. A man named Wolf!

The Author / Publisher advised that this title was available for $0.99 (or local equivalent), discounted from $2.99 on 2/8/2021 at the following retailers. These links may use our affiliate tag with Amazon and other retailers and as such may earn us commissions on qualifying purchases.