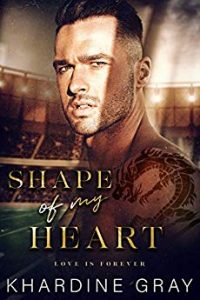 What happens when the arroganty, bad boy football player meets his match?

Josh Mancini, star linebacker for the Gladiators, has had an incredible lifetime of excellence as a highly-valued football player. He knows he’s good at the game, and he would never deny that he’s an arrogant, first-class jerk that always has the best women at his side. His life turns upside down when a tragic accident kills his mother and sister while they were making their way to see his first game of the last season.

Distraught with guilt and shame, his life crumbles and Josh spirals into alcoholism, loose women, and self-loathing that threatens to end his career for good—and maybe his life. The very last thing he wants is Amy, his new personal assistant, a woman tasked with whipping him into shape for the upcoming football season.
It was a clever move from the team’s PR company to hire her. Everyone knows that beautiful women are his weakness, and she has the kind of beauty that would rival the angels. It’s difficult to resist the intense attraction that draws him to her and he’d much rather get rid of her than have her around tempting him, but there’s one small problem… he needs her.

Amy’s an aspiring fashion designer. Everything gets thrown out of sync, including all her career plans, when her mother becomes seriously ill and needs lifesaving surgery.
It’s up to her to acquire the extensive funds this will cost.
A friend sets Amy up with the job to work for Josh as his PA, but she’s shocked to her core when she discovers that Josh is the worst person in the world. His daily protests, unsavory habits and loose women are unbelievable.

However, as Amy gets Josh to see some hope a spark is kindled…

From Worst Person in the World to Love of a Lifetime?

Will that spark grow into a flaming romance?

The Author / Publisher advised that this title was available for $FREE (or local equivalent), discounted from $4.99 on 8/9/2018 at the following retailers. These links may use our affiliate tag with Amazon and other retailers and as such may earn us commissions on qualifying purchases.