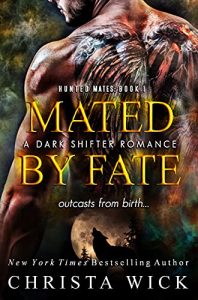 —Two HOT, emotional tales in one—

SETH & LANA: He's the brutally intense leader of his pack. And his newly discovered mateis unlike anyone the wolf clans have ever encountered. Shy but feisty with curves for days, it's ridiculous how badly Lana tests his control. But she's so much more than just the one woman he can't help but chase. A human descendant of shifters that can trigger the mating response is a game changer—for both the packs nearing extinction, and the deadly Hunters who've preyed on them for years. And now that she's become the Hunters' newest target, Seth will stop at nothing short of unleashing holy hell to keep her safe.

DENVER & ESME: He's the pack's resident bad boy. But she's the one that's off limits. Together, Denver and Esme shelter and train newly located latents—spending day after day fighting the volatile chemistry that torments them to no end. Wolves and witches don't mate. It's why Denver has been so damn ruthless about keeping his distance from the only woman he's ever loved. And why the two of them can't even be near each other when they were once inseparably close outcasts growing up. But the rules they've been forced to follow are about to change…now that the packs know Esme is far more than just their most powerful witch.

The Author / Publisher advised that this title was available for $FREE (or local equivalent), discounted from $3.99 on 5/3/2022 at the following retailers. These links may use our affiliate tag with Amazon and other retailers and as such may earn us commissions on qualifying purchases.