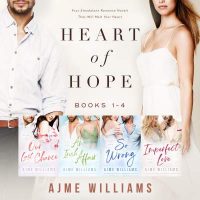 I made a mistake.
A huge mistake.
I knew I shouldn’t have left.
The town.
My life.
Him…
Nick, my brother’s best friend, had me at first touch.
It’s hard to resist a hot doctor like him.
Even for an innocent girl like me.

I’d always found Irish men to be irresistible.
And Devin?
He’s the hottest one of them all.
I had my chance with him.
Heck, I even have a baby with him.
A four-year old boy.
My only secret.

One plan.
One fake marriage.
One big disaster.
Everything about Dylan melts me.
He’s more than that ripped chest… those strong arms.
The best thing about him is his daughter.
The daughter that I babysit.
A fake marriage with me would win him the custody battle.
The only hiccup?
I let him take my V-card and get me pregnant.

A broken marriage.
A broken heart.
A broken home.
Brayden and I have everything going against us.
There was a time when we were madly in love.
Our laughter still echoes in my ears.
They say marriage is built on trust.
They said love is the foundation.
I wonder if we have either of those now.

Download your copy of this special bundle deal now. Mature audiences only.

The Author / Publisher advised that this title was available for $0.99 (or local equivalent), discounted from $9.99 on 8/29/2020 at the following retailers. These links may use our affiliate tag with Amazon and other retailers and as such may earn us commissions on qualifying purchases.