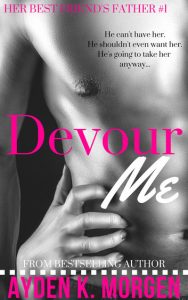 Don't get caught.
Never fall in love.
And steer clear of his daughter's friends.

The rules were easy enough for Roman Gregory…until Mila Lawson set out to break every single one of them.

When the twenty-two year old lands on the ATF agent's doorstep after a nasty breakup, he knows all too well that she's off-limits. At thirty-eight, he's almost twice her age, she's hurting, and the blonde bombshell is his daughter's best friend.

Mila knows all about wanting what she can't have. For four years, she's lusted after Talia McPherson's scary hot, terminally single father from afar. After walking away from her cheating ex and what she thought was her happily-ever-after, the last thing on her mind is jumping into a new relationship.

Until she find herself living with Roman in Santa Cruz…

Now all she can think about is making all those dirty fantasies come to life. With nothing left to lose, she makes him an offer he can't refuse: Two weeks of no-holds-barred sex. No strings. No commitments. No messy emotions.

Roman has no business agreeing to her insane proposition, but he does anyway.

He can't have her. He shouldn't even want her. But he's going to take her… and he has no intentions of stopping until she's his completely.

If there's one thing Roman knows for a fact, it's that he doesn't lose. Ever.

The Author / Publisher advised that this title was available for $0.99 (or local equivalent), discounted from $1.99 on 3/18/2019 at the following retailers. These links may use our affiliate tag with Amazon and other retailers and as such may earn us commissions on qualifying purchases.